Isn’t it funny when teenage girls are in arguments or fights, they have to call each other negative things about their appearance to make themselves feel better?

Hi, my name is Liz, otherwise known as: “Fat Bitch”.

Yes, you heard that right. I am the “Fat Bitch” in arguments with skinny girls, other fat girls, boys that teased me, men that catcalled me, and friends who stabbed me behind my back.

Nice to meet you. 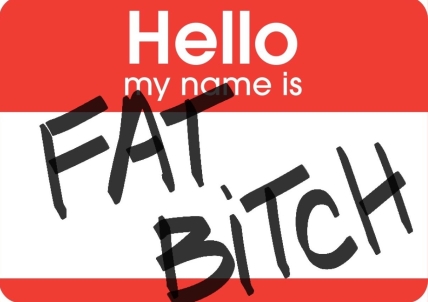 I don’t exactly remember the first time I was called a “fat bitch” by someone, but I could tell you it was before I hit puberty. “Fat Bitch” is always that insult that I believe every single fat girl on this planet has been called at least once in their lifetime, and if you haven’t, well, I got some news to break to you. The first time you get called a fat bitch is usually going to be either that mean girl that doesn’t like you or by your own best friend. The first time I remember being this “fat bitch” was when one of my closest friends in grade school passed a note to another girl saying I was a “fat bitch” because I gave them an attitude. Of course, it hurt; how can one of your closest friends see you in such a negative light? Do they see my fatness as an ugly thing and wanted to hurt my feelings by calling me that? Being called a “fat bitch” hurts the first couple of times, but after that 10th or 11th time, you just shrug your shoulders and take a sigh.

It’s not the first time, nor the last time I’ll hear my name being “Fat Bitch.”

As I got older, the “Fat Bitch” comment came out of more people’s mouths; they weren’t just the mean girl in your class or your friend that you got into an argument with, it’s now the boys that tease you, and the men who sexualize you while you are walking down the street. Getting the “Fat Bitch” name from boys wasn’t a surprise; they would call me that and they got a reaction from me. I chased them (because middle school boys seem to love when girls run after them to hit them or slap them; maybe it turns them on in a prepubescent way), I’d get tired because I was chubby, and hear them laugh and call me a fat bitch until they got bored of me. Once I got used to the name being called out by boys nevertheless, it didn’t really bother me anymore. Boys were stupid, they stunk, and they weren’t even that cute, to begin with. But when you find that one boy that is really nice to you and you like him because he gave you some sort of attention in a place where boys didn’t want to be seen with any fat girl, you go all head over heels for the boy.

Being 12 or 13 years old, the things that these boys can say about you can break your heart, so it used to be devastating when these same boys that gave me attention and were nice to me in private would call me a “fat bitch” in private to their homies because, again, they didn’t want to be seen with the “fat girl” of the class, it hurt like a bitch.

It seemed like the name would never leave me; I was damned to be “Fat Bitch” until I wasn’t fat anymore. As I got older and men started to call me “fat bitch” after failed catcalls, I knew that I was nothing but a “Fat Bitch” in this world; people only saw me as being fat and whenever I stood up for myself in any capacity, I was a bitch.

I’m just now “Fat Bitch who doesn’t give a fuck so you could kindly kiss my fat ass.”

There is only so much you can do to a society that will always have negative thoughts about fatness engraved in their heads. To this day, fatness is still negative, it’s a before, it’s always a target for fitness freaks to poke fun at, and yes – as long as I’m a fat woman, I will be a “Fat Bitch”. Who the hell cares?

As a woman, we will all be called a bitch once in our lifetime, men will always call us “bitches” when we don’t conform to what they think we are supposed to be like in society and depending on our outer appearance, there will always be something “negative” about us to accompany “bitch”. Mine just so happens to be “Fat Bitch”, although now, I might be a “Bald Fat Bitch” because I don’t like the luscious long locks that “beautiful women” are supposed to have.

My point being: I stopped letting two words define my self-worth and the respect that I deserve. Hell, I call myself a fat bitch because I refuse to allow it to be a negative thing in my life. Whether or not, I am who I am and I have to love who I am and that includes the body that I’m in too.

If you don’t like me and think “Fat Bitch” is going to hurt my feelings, you’re about 13 years too late, sweetheart.