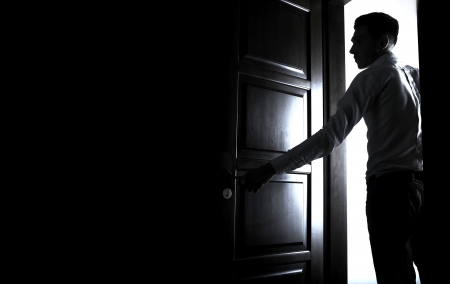 A family of four and a guest sir at the dining room table, having dinner on a Saturday evening. A mother and father, Sophie and Milo, a 20-year old girl and her boyfriend, Summer and Evan, and a 12-year-old boy, Emerson. Light chatter and the clanking of forks and glass cups surround the small dining area.

The atmosphere is broken when the doorbell rings.

Sophie: Were you expecting someone, Milo?

Milo: Not that I know of…

Milo gets up from the table and walks towards the front door.

Milo: Jennifer and my dad aren’t coming until next Sunday for dinner…

Milo opens the door and is taken back by who’s at the door. A tall, skinny redhead in a wool coat is standing there; she’s Milo’s forever best friend, Mollie. Milo hasn’t seen Mollie ever since she left NYC 12 years ago to live out her dream of being a dancer. She’s traveled the world, dance for the elites, made a name out of herself, but it cost her her marriage and the child she left behind. Once Mollie left, most of her family shunned her away due to the poor choice she made to leave her child behind. Milo has been the only one that’s willing to talk to her throughout these years.

Awkward silence. In the distance, Sophie is heard yelling at Milo, “who is it, hun?” until she walks to the door behind Milo and sees who it is. She is just in shock to see Mollie as Milo is.

Sophie is now cleaning the kitchen after dinner and the kids are doing their own thing around the house. Milo and Mollie sit at the dining room table across from each other, not saying anything. Mollie is in deep thought, trying to say what she wants to say in this conversation, while Milo sits there speechless.

Mollie: So, uhm… how’s everyone doing?

Milo: Everyone’s doing good. The kids are okay, Soph’s okay… how about you? It’s been a while, huh?

Mollie rolls her eyes and sighs; Milo knows when to get right over the bullshit.

Mollie: I’m sorry I haven’t called for a while. Things got really crazy when I was in India for this production.

Milo: I’m just stating the facts, Mol. You know I worry about you.

Milo: So why are you here?

Milo: Look, Mollie, I haven’t seen you in person for 12 years. My kids don’t even know who you are and you show up here in the middle of our dinner where Sophie and I was meeting my daughter’s boyfriend for the first time?

Mollie: Sum-Summer has a boyfriend?

Milo: *cold* Summer is 20-years-old, Mol. She’s not the little kid you remember her as.

Mollie takes in the reality on how long she’s truly been gone.

Mollie: You are the only person I could talk to, Milo. I haven’t spoken to my mom or Jennifer or Maryette in years; they want nothing to do with me and–

Milo: *interrupts* What made you come back? Why now?

Mollie: *sullenly* I can’t competively dance anymore. I broke one of my bones in my foot and I had to retire. I’m simply back to start my life over.

Milo: *srunches eyebrows* Listen, I respect you coming back to start your life over, but don’t you think it’s a little too late?

Mollie: *angrily* And who gave you the right to dictate whether or not it’s too late, huh?

Milo: Mollie, Weston doesn’t live in New York anymore. He moved to Virginia with your daughter.

Mollie: Who said anything about Weston or my daughter?

Milo is now confused. Did he miss something?

Milo: Aren’t you back in New York for them?

Milo gets up from the table and circles around a bit; Mollie doesn’t move.

Milo: So let me get this straight… You come back to New York to start your life over, y’know, live like one of us normal folk, but don’t want to make things right with your family?

Mollie is about to say something until Milo cuts her off.

Mollie: What am I supposed to say? “Hi, you’re a whole ass 12-year-old girl now but I’m the mother that chose her career over you and now that’s over and done with, I want to be back in your life”?

Mollie gets up from the table to be face-to-face with Milo; she’s now even more angry.

Mollie: No, it’s not. You don’t know how Weston is going to react if I just show up in bubblefuck Virginia and demand to see my daughter. I have no custody over her, technically I don’t exist in their world and I would rather it say that way. Why hurt the one person I wish I didn’t hurt even more by showing up in her life and force her to love and respect me just because I’m her mother. I would rather her live her life the way she’s living it without me in it; she doesn’t need me ruining her damn life.

Mollie turns back around towards the table to gather her purse in order to leave the house.

Mollie stands near the front door and rools her eyes. She turns around to look at Milo. Milo walks up to her.

Milo: I’m sorry, Mollie. You know I won’t ever understand what happened between you and Weston. It just upsets me because I could never imagine my life without my kids. You know the hardships Sophie and I went through when Summer was born. We were just kids ourselves–

Mollie: I wasn’t ready to have a child yet–

Mollie gets her coat from the coat hanger.

Mollie: It was a stupid idea to come here, just forget it.

Milo: *yells* Can you just listen to me for once, Mollie?

They both stand there in silence. No noise in the house is present either.

Milo: Mollie, I fucking care about you. You’ve been my best friend since we were babies, I’m only frustrated at you because you keep running away from the things that matter the most. I get it, you don’t want to cause confusion and give off mixed feelings towards your daughter, but she also deserves to know the truth and she deserves to know that deep down in that thick skull of yours, you constantly think about her every single day and hope she’s doing fine. Now I don’t know why you came here first out of all the people you should be making amends with, but–

Mollie: I need a place to stay, Milo. I don’t have nowhere else to go and you’re the only one that gives a shit about me. I don’t have anyone else.

Milo is taken back by Mollie’s words; he’s speechless.

Mollie: Please, Milo. We’ve always had each other’s backs. I know I haven’t been the greatest person in a while, but I can’t do this on my own. All the money I had went towards my hospital bills and the plane ticket back here, I just want to be able to get on my feet, but I need your help.

Milo takes in a deep breath.

Mollie: I will not be here long, Milo. I promise I will not overstay my welcome and try to be out of your hair as soon as possible.

Milo: I’ll talk to Sophie about it.

Mollie hugs Milo and Milo is taken back. Mollie isn’t the lovey-dovey type of person.

Mollie: Thank you so so so so much, Milo!

Milo: *smiles* Yeah, yeah… You know I gotchu, but you’re going to need a job if you’re looking to get out of here quick.

Mollie puts her coat back on the coat hanger and tosses her purse on the sofa.

Mollie: Oh, which reminds me, I have a job interview at our old high-school! They’re looking for a dance teacher!

Mollie: Yeah! I wonder if your dad still works there, remember when we had them for chorus class? Man, that must’ve been awkward for you, Milo.

Mollie goes to sit back down at the dining room table where she has left her cup of coffee. Milo is still standing there in awe.

Milo: My father doesn’t work there anymore. I do.

Mollie spits out her coffee in shock. She wipes her mouth and looks at Milo, who is also looking at Mollie.

Aren’t they going to have some adventures together, huh?