Before we move on to the context of this week’s letter, I want to remind you guys on some of my background regarding mental health: I am not a licensed psychologist, I am simply a person that deals with Social Anxiety Disorder & Major Depression and uses my platform to help decrease the stigma that mental health carries. I am in no means making any money off of the posts I write on WordPress, and I simply write about my experiences for the sake of sharing my story in hopes of helping others.

Without further ado, let’s talk about how YouTuber The Rewired Soul is a prime example of a person that uses mental health advocacy as an opportunity to gain “clout.” 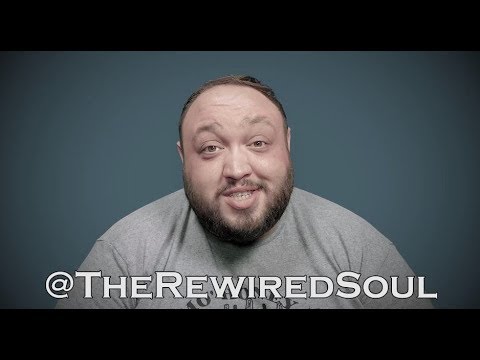 If you never heard of The Rewired Soul, he is a commentary YouTuber named Chris who at first began his channel talking about different topics regarding mental health. As his channel began to grow he began to use events and news of other YouTubers and attempts to tie it back to mental health to ultimately send positive messages about the issues at hand. I first mentioned him in a post I wrote about Grav3yardgirl’s video about her own mental health – he discussed the backlash that she was getting when she was describing her anxiety and how it uniquely functions by having other commenters adding that “everyone has anxiety, so deal with it”. He pretty much explained that while yes, a lot more people in modern society deal with anxiety more than ever, there is a difference between having anxiety and having anxiety on a clinical level where it’s then diagnosed as an anxiety disorder. People have their own opinions on the subject of why “anxiety and depression shouldn’t be diagnosed as disorders”, but I liked how he decided to talk about the situation at hand, and I agreed with a lot of what he was saying. As time went by, a lot of people also enjoyed how honest and communicative he was with mental health. Slowly but surely, he became known as “The YouTube Therapist”.

A lot of people looked up to him and respected him for what he was doing on YouTube; he was commenting on YouTube news with a twist, which involved a lot of conversations about mental health, self-care, and positive vibes. But, all of us really didn’t know who he really was, and in the recent months, he has started to get into controversies on his own with other YouTubers, and after a while, people began to uncover who he really was.

The biggest issue was that many people started to believe that he was masquerading a “Drama channel” with mental health, which in no way shape or form, is right.

This YouTuber had the community fooled when he never truly spoke out about his credentials until he began to get questioned by the community who were skeptical of a man who gave unsolicited mental health advice to other people in the media. In a nutshell, he portrays himself as this man who knows the rights and wrongs of mental health, which many of the things he talks about regarding mental health is opinionated and simply just not true. For example: To put out the message to your audience that anyone on mental health medication should stop taking it because it doesn’t solve your issues and only worsens your mental health is a very dangerous thing to put out in the world. Medication, especially for mental health, is important to take because it helps the person dealing with the specific disorder function better. To just say that it’s bad to take medication for your well being is simply not advocating healthy mental health, first of all.

The main issue people have with this YouTuber is that he projects himself as this savior of YouTubers and whatever he says about other people and diagnosing their issues is only “helping them” get to the bottom of them. Again, mental health advocacy isn’t about diagnosing other people, nor giving out unsolicited advice about their personal health on the internet.

That’s not being a mental health advocate; that’s being a fraud.

To say this as openly as possible: it’s extremely hard to even explain how it feels to go through what one goes through with their own mental health on a daily basis. I come from a family of mental illness, I’m singlehandedly experiencing what it is to support and witness a loved one deal with a much more severe case of mental illness, and on top of that, deal with my own mental disorders while trying to live my life as a young woman. It’s not fucking easy, and anyone that knows what it’s like to walk in the same type of shoes knows the constant struggle it is to cope and go on with your day. It’s exhausting, both physically and mentally. So when you see people on the internet openly talking about their mental health journeys and their experiences so unapologetically, I salute those people because I know they are doing it to make mental health as normal as possible and less of a taboo or secret that carries embarrassment and shame.

So when people who really care enough to educate themselves or be completely honest with their intentions when discussing mental health and do use it as some sort of an excuse to play the likable card, is truly disgusting and does nothing but make the opposing argument about mental health even stronger: “See, people use their mental health issues just to get sympathy or just to be in trend because everything else about mental health in culture is just romanticizing it!”

Don’t take that away from people for your own personal gain, The Rewired Soul.