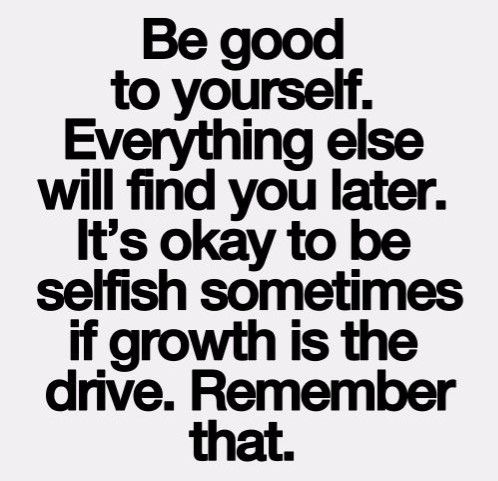 The word “selfish” isn’t a bad thing to be.

People tend to think selfish people are these narcissistic people who only care about themselves and don’t have any regards to anyone else around them. Yeah, that’s what selfish people do, and it’s a shitty thing to be, but there is a way to be selfish without having the “selfish stigma” smacked on your back.

In other words, being selfish with yourself is not a bad thing.

Being Selfish with Yourself

Being selfish with yourself simply means that you are looking out for yourself and defending yourself when it’s needed. People like me, aka people who hate confrontation and upsetting people when I feel like something isn’t right seem to always get the shortest end of the pile of sticks because we come across as nice. Without a doubt, nice people are easily targeted to be manipulated by other people because these other people know the nice person isn’t going to do anything about it.  You then find nice people being tired of getting taken advantage of, and sooner or later these once nice people turn into angry, cold-spirited people.

I mean, you can’t blame people who were once nice now being the total opposite all of a sudden. Kindhearted or not, people get tired of feeling like people don’t appreciate them for their kindness and availability they give to these same people. It sucks that some people have to resort to being a bitch to feel like they are getting the respect that they want. At the end of the day, aren’t you just doing the same thing these other people were doing to you?

There was a time in my life where I was transitioning into a bitch because I was sick of being used by the people who I thought were my friends. Not only was I tired, but I wanted the respect I wasn’t getting from them. In becoming this person that I clearly wasn’t, not only was I losing touch of myself, but I was losing my friends in the long run. After realizing that I still wasn’t doing the right thing and my “friends” were still making me feel like shit, I knew I had to change not for my friends, but for myself.

I realized that I needed to be selfish with myself. It’s one of the best things I’ve done.

People assume that once you become selfish with yourself, you stop caring about them. Being selfish with yourself just means that from here on out, you are defending yourself in situations where you are feeling disrespected or targeted and your mental health and self-worth becomes before anything else. Before I started to be selfish with myself, I would constantly have a bad mindset because I was more worried about how others felt around me and dealt with things instead of considering my own. I would constantly self-harm myself when someone I cared about used to be annoy or mad at me for something I knew I didn’t cause.

But after constantly feeling like shit and being let down by these same people who I cared about, something wasn’t adding up right and I needed to change something.

Being selfish with yourself isn’t an excuse to cancel everyone out of your life because you don’t agree with something they did or said. Just because you are in-tune with yourself and your own feelings, it doesn’t mean that you don’t reciprocate the same respect and support your real friends give to you. At the end of the day, you will learn that no matter how nice or mean a person is, everyone tends to look out for themselves and if it doesn’t go their way, it’s no way at all. People tend to forget just how much relationships and friendships work, and when one person is putting their all in sight of the other not doing a damn thing, then it’s time to reevaluate the type of friendship you want to have with this person; you simply just don’t pick up their slack and still cherish that friend. When you’re selfish with yourself, you let these certain people know that if they don’t start giving you the type of love and support you give to them, then the friendship isn’t going to last much longer. When your words match your actions, people tend to take you more seriously.

I’ve had a couple of friends this last month not reach out to me in time when my uncle had passed away. These same people, who I constantly defend and show love to, didn’t do the same for me in my time of need. Now, if I was the person who didn’t put in my effort into the friendship, then I have no right to complain. Yeah, being selfish with yourself also requires you to take responsibility if half the problem is also your fault. In this case, yeah, I was mad at a few of my friends who didn’t show love, but I also cut off the people who had no reason to be in my circle because me and the other person were not putting effort into our friendship. The ones who I did give a fuck about, though, got a rude awakening for me when I pretty much called them our for being shitty friends.

Are these people completely cut out of my life now that they made this one screw up? No. Being selfish with yourself doesn’t mean it’s always my way or the highway, I simply leave it up to the other person in what they want to do. At the end of the day, the type of friend that I come across as is the one who will always take back shitty friends because we have memories or you did pay for lunch for me that one time.

Being Selfish with Yourself in Friendships

But being selfish with yourself (how many times have I say that damn phrase) actually helps you look at situations from outside your own perspective, in my opinion. If your girl friend broke girl code by hooking up with someone you were interested in and she said sorry about it and it will never happen again, of course in the moment you’re going to forgive her. If you take yourself outside of the situation and see it for what it is, you say fuck you for doing what you did, bitch. I swear, it’s not being a bitch or being very sparse with your chances with your friends, it’s seeing what the friendship really is.

So let’s take this same situation and put it in two different scenarios:

Which scenario are you more forgiving in? Honestly, it depends on the person. In this situation, I would’ve forgave the girl in the second scenario. Oh but why, Liz, is it because she’s been your friend longer? But the girl in the first scenario sees you every day and probably knows you better and blah blah blah.

Lemme tell you why:

That’s honestly all I have to say about that, because that’s just a little way on how being selfish with myself works. It’s so hard to explain (and that’s why it’s taking so long to get to my point), because it varies from person to person.

What it ultimately does, though, is help you see self-growth, witness self-love and respect, and it ultimately makes you happier. You begin to pick out the weeds within the batch of flowers, and those who are seriously good friends will feel more appreicated once you notice them and pay no mind to the people who were simply taking up space.

In the long run, it’s not a bad thing to want to look out for yourself and defend yourself, because who the hell is going to do that for you?