I wanted to share a story that I feel like I never expressed to the outside world because I always thought that people would look at me weirdly and think I’m awkward and not normal, but I realize that I wouldn’t be the person I am today if this didn’t happen when I was younger.

Long story short: I was one of those kids that had imaginary friends, but not in the way you may think. You see, kids interact with their imaginary friends; they would have tea parties with them, conversations with them, and everyone around them knew that their imaginary friends were present in that child’s life. Those imaginary friends would then vanish once that child began going to school and started making real friends of their own. I always had friends when I was younger, yet I would come home and still imagine these people that I created in my head. My “imaginary friends” never interacted with me, they would interact with each other, like characters in a story. When I got older, I began drawing these characters in notebooks. I started to draw out their everyday lives and began putting them in scenarios that were compelling to my child/teenager self. I mean, granted many of these scenarios involve people being secretly in love with each other because that’s pretty much the gist of a teenage girl, but they still kept me creative and entertained. There wasn’t a moment that I remember where I wasn’t thinking about characters in my head. 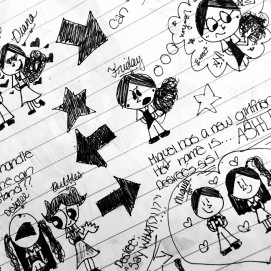 As I got older, these characters and their stories began to become more developed and complex because I began to learn more about life and what it really meant to live in it. It wasn’t all about lovey-dovey crushes anymore, but it was about real life situations and butterfly effects. It was psychological damage due to the events of their past. It was going through enough heartbreak in their lives for them to realize what was right in front of their faces. It was divorce, it was marriage, it was about all these different things that can happen in life, and as I got older, they’ve gotten older with me. 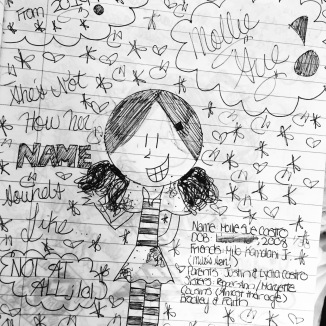 At first, many of my “imaginary friends” were characters from my favorite television shows. They had the same traits as the canon ones, but I began to make them my own to fit into the universe that I created. For example, I used Bubbles from The Powerpuff Girls a lot when I was younger. In my universe, she was just a regular girl within a regular family, being the oldest of 4. Nowadays, she resides on the outskirts of the tri-state area with her boyfriend, Cody, and their (almost) three-year-old son, Max. If this still doesn’t make sense, think of it like fanfiction in an alternate, non-canon universe. In the last couple of years, I started developing my own unique characters with complex backgrounds, and one of my favorite characters to go back to and analyze some more is a young girl named Mollie. I first mentioned her in a post back in August called “Stories I’ve Been Working On.” Side note: I’m always working on her. She’s one of those characters who at first was your typical girly-girl with no dimension to her story, but when I got older and started to develop her more, she became this complex creature with layers upon layers. I’ve written my first short film about this character in her future without any of her backstory shown. I remember sharing her for the first time in my short film with my screenwriting class and the entire class had a debate on whether or not you should like Mollie as a character or not because of her background. That’s the shit I live for when creating my characters. It’s the things like that that make me love what I do, and I know I do a hell of a good job doing it. 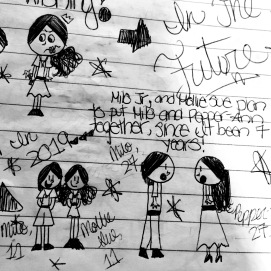 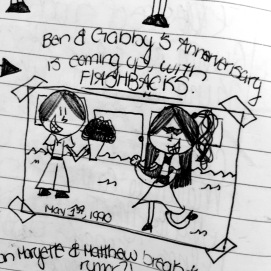 These imaginary friends I had when I was younger are the reason why I am a writer today. Characters have lived inside of my head for over a decade, their stories have been written down in various different forms such as scripts, musicals, scenes, short-stories and graphic novels. This detail about myself is one that I rarely share because it’s been something that has been a part of me for so long that I forget to mention that this is the way my mind works. If I could write every single story out on paper to remember it, I definitely would (I mean, I remember coming up with some sick ass stories when I was younger and I wish I documented them more efficiently back then). There is simply no time (especially not now) to do so, but I keep a mental note on what and where everyone is at this point in time. I am currently working on a story involving two of my dearest characters I’ve been working with for possibly over a decade (you can read more about them here in this post). The thing I love most about my characters is that they all most likely connect to each other one way or another. They all live in the same universe (besides one set of characters who I created solely for my feature-length film script, The Fire Remains). None of them are supernaturally special or sci-fi related, they are all normal people living normal lives. Those are the type of stories I want to tell: compelling stories about people that you can relate to because they’re realistic. As I developed more and more on these characters, I see just how realistic their lives are and how worthy they are becoming more future scripts and short stories. Maybe this is where my passion for storytelling is going, who knows? What I do know is that this creative outlet I made for myself at a young age is what made me want to study English and writing in college and grad school and make a living off of it.

Who would’ve known a couple of imaginary friends would seal my fate of passion?