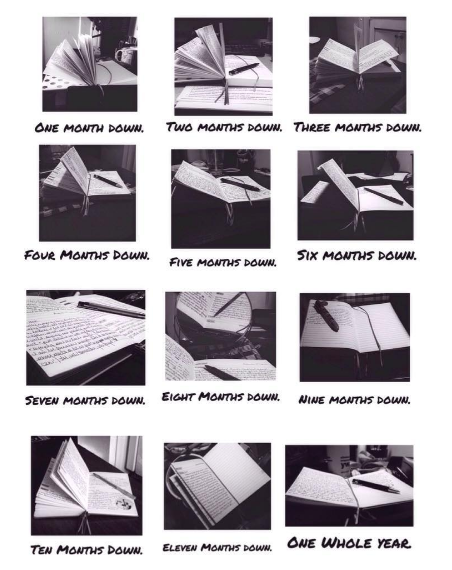 For the entirety of 2016, I decided that I was going to journal write every single day until the end of the year. For the most part, I kept up worth it and the 300+ page journal I kept is now completely full of memories, moments, and simply just thoughts I had at the time. By the time the year was ended, I realize just how much journaling the entire year helped me shape into the person that I always wanted to be.

People dismiss journaling because people classify it being something that “emotional” people do to cope with their emotions. Where, yes, it’s a place where you most likely write your emotions down whenever you’re feeling them, but journaling could be s helpful when things get a little too much to handle. Nowadays, people keep bullet journals to help organize their life and make sure it keeps them on track, so it’s not always about writing to your therapist named “Diary”. I kept a daily journal for an entire year for one reason and one reason only: to make me feel better.

I came into 2016 from having such a rocky and terrifying 2015. I felt like I was slowly losing who I was and I needed to change it ASAP. I decided that I was going to keep a daily journal that would document the year 2016. 2016 was an important year for me because for the main reason that in June, I was graduating college. Who would’ve thought that there was so much more that I actually documented that are now life-long memories? It’s crazy how life works that way.

I don’t know why I stopped after 2016 was over, but I did. I noticed that towards the end of the year, my entries sounded a lot more like Facebook status updates instead of things worth documenting, but even after that – journaling really helped improve my mental health tremendously. I know everyone isn’t a writer and may not feel it be necessary to write in a notebook without a reason, but doing so helps you “talk it out” with yourself with words.

Sometimes, all you need to do is to talk out your thoughts to put them out in the world. Journaling does that while also keeping them confidential, just in case there are just some things you don’t want someone knowing like a family problem or health problem. Personally, I was going through a lot of family problems before I started writing in a journal. Although journaling didn’t help the problems go away, it did make it easier to cope and deal with my feelings in a way that didn’t make me lash out in anger.

I also wanted to start journaling to physically see the change in myself once I finished the book in a year. Although I haven’t had the time to read 365 pages of entries, I know I saw the change in just a few of the posts that I wrote. I began to write about the happy things in my life, as well as look at myself through an unbiased lens. It’s weird because I felt like journaling made me into a “real person” again because the journal had memories and moments told in my perspective, which meant I had to trust myself enough to believe these things happened the way they did.

The fact of the matter is that I was always a journal writer. I’ve kept journals since I was 9 years old, the difference between those journals and the daily one I kept was that these other journals spoke about things that happened because of other people. “Oh, this girl told a nasty rumor about me and I was so close to beating her ass at lunch today.” “Oh my god, my crush finally kissed me in the rain!” They were about moments that involved me, yeah, but these became impersonal because they never truly showcased any growing I did over the years. I actually just recently threw away a lot of my old journals because of this very reason. Why did I want to keep journals that never represented my journey?

Besides my middle school journal, the only other journal I kept was my 2016 journal.

Sometimes, journaling just shows you the journey that you forget about being on once you’ve already been there.

Because it’s already too late into 2017 to start a daily journal for the year, I’m planning to strictly keep a summer one. Because 2018 is going to be another big year for me, I might just start another daily journal then, to document that year’s accomplishments and big events that I can’t wait to actually go through.

Pick up a pen and book and start writing. Trust me, it doesn’t hurt to try. 😉